Two birds with one stone: Is this a better way to deal with medical waste? In the fight against Covid-19, hospitals are both the front line of the battle, and a growing source of the problem.

With every influx of new COVID-19 patients, hospitals and other medical facilities amass piles of used Personal Protective Equipment (PPE) that are potentially highly infectious and highly dangerous.

Impoverished areas in particular face major problems when trying to dispose of this infectious waste, but even those with existing disposal infrastructure usually resort to legacy technologies that are both inadequate to the task and a threat to the community.

But one enterprising medical centre, in one of the poorest areas of the Philippines, has found an answer. Cotabato Sanitarium in Maguindanao was about to invest in an autoclave system to deal with its infected waste. This system works by placing infectious equipment and waste in a large chamber where it’s sterilised via pressurised steam. Autoclaving consumes considerable amounts of energy as well as water to create the steam and cool the system.

But as Dr Ibrahim Pangato, Chief of Hospital II, was considering the purchase, a colleague told him about Sterilwave, a new technology that addresses the environmental and safety issues related to medical waste.

Produced by Bertin Technologies, the device consists of a single vessel housing a grinding blade and microwave. Sealed waste is automatically pulverised to reduce its volume before being sterilised by microwaves, effectively rendering it inert and safe to send to municipal landfills.

For hospital staff, being able to dispose of the growing amount of waste safely has removed a major headache. But in an environment where personal protective equipment is both costly and scarce, deciding what to discard and what to re-use presents another headache.

For Cotabato Sanitarium the next step is differentiating between what medical equipment is a threat, and what can be reused. Typically, they would re-sterilise or reuse material when possible. But the pandemic has made this difficult.

“We are still contemplating how to reuse or recycle items which are not really infectious, but with COV-19, it’s tough to do that,” Dr Pangato said. And it’s a challenge confronting hospitals well beyond the borders of the Philippines.

“Reducing and reusing needs to come into the story,” says Dr McGain. “As an example, look at the yellow disposable gowns we use in Australia. We might go through hundreds of these a day in a hospital. Don’t forget this COVID-19 virus actually does die at 60 degrees heat. So for instance, developing gowns that can be sterilised and re-used.”

Waste is a security issue now

And it’s not just hospital staff that need to be considered. Infectious waste disposal is often done off-site, and handled by external providers. “This means relying on truck drivers to take infectious waste to dispose of it properly, ”explains Soufiane Belkhiri, Asia Sales Manager for Bertin Technologies.

These drivers are often unaware of, and unprotected from infectious products, and therefore exposed to danger.

It’s also a burden on the environment, says Belkhiri. “If it’s done near the hospital, it may be by incineration or chemical treatment, which produces emissions and adds to environmental impact.”

So new tech, like microwave sterilisation, can solve multiple issues in one go. But despite its value to Cotabato Sanitarium, Pangato has one last word of advice: check your local regulatory environment.

Because they were one of the first hospitals to install Sterilwave, they needed to provide documentation to verify the microwave technology operated within the government’s regulations, and receive approval permits for its use.

Dr Pangato said this process took well over a year, but now the technology is well established in the country, with ten units installed in total.

According to Belkhiri the pandemic has increased interest for such solutions across Asia, with many hospitals hoping to replicate the Cotabato experience with on-site, sustainable solutions.

It’s a hope that most of the countries in the region are likely to share. 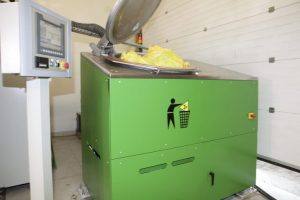